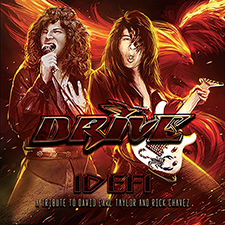 IDEFI, the material that should have made up Houston based progressive metallers DRIVE’s third album, finally hits the streets in a proper release.  Working very closely with the band members and their families, IDEFI is not a reissue, rather, a celebration of singer David Earl Taylor and founder member / guitarist Rick Chavez, lives.  The album features a huge 24 page booklet, liner notes from Chris Leibundgut, heartfelt tributes to both Chavez and Taylor and the first 100 orders will also include a Rick Chavez guitar pick replica. The album is limited to 500 copies. —————————————————————————————————————————–
Mention the word ‘Texas’ and connoisseurs of all things metal will instantly sing the praises of legendary 80’s acts such as Pantera, WatchTower, Helstar and S.A. Slayer, fierce frontrunners of what was then an incredibly potent Lone Star state scene that produced a plethora of metal classics revered to this day.

Beyond the aforementioned first wave of bands that firmly planted the flag for Texas metal, there is one act in particular that stands out from the pack and is remembered for a pair of stellar albums that rival anything in Texas metal lore. That band is DRIVE, whose members came together barely out of high school and, unlike most of their TX metal brethren, left home base and set out West in search of fame and fortune. “We’re from the Northside of Houston and have always believed there is great music and art coming out of our community but there was no music scene here”, explains guitarist Rick Chavez the decision to pull up stakes at the time. “So we relocated to Los Angeles hoping to create a bigger buzz and make our mark. We got to L.A. in 1986 and started playing shows and hooked up with a manager. Our song, ‘I Need the Nights’, was entered into the KNAC radio sponsored ‘Best in the West’ contest and won a spot on the “10 Best From The West” compilation.”

Released by Rhino subsidiary Rampage Records in 1987, the label saw potential and decided to sign the young upstarts, consisting of Chavez, co-guitarist Mercy Valdez, vocalist David Taylor, bassist Michael Anthony Guerrero, and drummer Valentine San Miguel, to a full-fledged deal. Recordings quickly got under way and DRIVE’s debut album, ‘Characters In Time’, featuring session hire Eric Singer of latter day Kiss fame on drums, hit the shelves in July of 1988. While the record received tremendous reviews from the international rock press, including the coveted 5K rating from UK metal bible, Kerrang!, the band were about to hit turbulent waters due to record company hold-ups. Although DRIVE managed to get back in the studio and record their sophomore album, ‘Diablero’, a noticeably more mature and sonically advanced effort, the band got stuck in label limbo and, frustrated by a lack of progress, slowly the members started heading back to Houston, with Mike Conde replacing Mercy Valdez on guitar. A re-tooled version of ‘Diablero’ finally saw the light of day in1992 via Zoo Entertainment. “If we’re going to be truthful about it……I turned in my version of the album to Rampage/Rhino but the label had other ideas”, reveals Chavez. “They wanted songs changed and were looking to sell the band to Zoo/BMG. The ‘Diablero’ that was released was not the original album I turned in and wanted released, from the track listing to the album cover. So, yes, it was all very frustrating but we’re still very proud of the songs.”

Caught up in the grunge rock avalanche which turned America’s musical landscape on its head almost overnight, DRIVE were battling uphill all the way in their valiant fight to get ‘Diablero’ its due. The band did manage to do a short run of dates but after the tour everyone started going in different directions. Chavez and Taylor gave it one last try, adding Michael E Ribeiro, a bass player they had met in LA, and drummer Carlos Cervantes, a Houston local. “We did local shows and recorded some songs,” remembers Chavez”, but after a short run I decided to take a break.”

A break that became permanent as other priorities got in the way of any further DRIVE activities although everyone continues to play music to this day. The death of vocalist David Taylor on June 15, 2009, resulting from a freak car accident while he drove along a San Antonio Interstate, forever closed the door on a reunion of the original line-up, something Chavez admits “we had talked about it here and there but life happened – marriages, babies, jobs; we were all doing different things.”

And yet there is an unexpected new and final chapter in the band’s history in the shape of ‘iDefi’, the album you are holding in your very hands. Consisting of ‘Inherit the Wind’ and ‘Insanity’, familiar to those lucky enough to score a ‘Diablero’ advance cassette of the unreleased Rampage version, and 8 other songs, this posthumous addition to the DRIVE catalog is further testimony to the band’s pure class and style, a perfect blend of metallic muscle and melody, topped off by David Taylor’s soaring vocals, that holds up well to this day.

“’Inherit the Wind’ and ‘Insanity’ are the versions meant to be on ‘Diablero’. All the songs are original versions – some are demos and raw recordings, nothing has been re-recorded for this release”, explains Chavez. “’Inherit the Wind’ and ‘Insanity’ aside, most of the songs were recorded in L.A. and Houston and were supposed to be included on our next album that didn’t come to pass. We had some interest from Chrysalis other labels at the time but because of original contracts and the nature of the business it would have cost another label a small fortune to buy us out of our contract. We were not so much dropped from Zoo…. more like put on a shelf so if anybody else wanted us it would have cost them. And this was at the dawn of the metal killing grunge scene.”

“The release of ‘iDefi’, for me is a tribute to the voice of the band, David Taylor, and his memory and legacy”, states Chavez. “I will be forever grateful that he was the man that sang my songs. We are thankful that Kai and Dave have remained fans and believed in the band enough to seek me out and want to release these songs.”