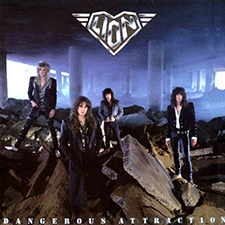 LION’s highly sought after Dangerous Attraction is considered a hard rock masterpiece of the highest order by many fans of the genre.  The album, the band’s first full length, was originally issued by Scotti Bros in 1987 and featured a reworking of their independent hit “Powerlove.”  The remastered reissue also includes the “Transformers” theme song as well as a 16 page booklet, extensive liner notes detailing the band’s history written by Chris Leibundgut and is limited to 500 copies.
—————————————————————————————————————————–
For as many platinum success stories as the iconic L.A. hard rock scene of the 1980s produced, with Quiet Riot, Mötley Crüe and Ratt leading the pack and cementing what the mighty Van Halen had started several years earlier, followed by the likes of Poison, Guns N’ Roses and Warrant during the heydays of MTV, there are more than a few L.A. casualties that never got to the proverbial mountain top but made their mark just the same, producing stellar albums that are rightfully remembered and cherished by fans around the world to this day. One such band is LION, whose five-year existence produced one EP and two full-length albums, as well as several memorable soundtrack appearances. And, LION is also the band that launched the career of guitarist Doug Aldrich, one of the most revered axe slingers around, a much valued collaborator and sidekick to legends such as the late, great Ronnie James Dio and David Coverdale, resulting in a 10-year stint with Whitesnake.

A Transatlantic cast of characters, the origins of LION go back to a L.A.-based project called Champion which featured Welsh guitarist Tony Smith, who had recorded a pair of albums with UK progsters Lone Star, and bassist Alex Campbell, later to turn up in Hellion. In need of a drummer to cut some demos, they connected with Texas native Mark Edwards, fresh off his stint with Sunset Strip sensations Steeler, propelled by the guitar pyrotechnics of a young Swede by the name of Yngwie Malmsteen whom Edwards was instrumental in bringing to America. Scouring the local scene for that star quality vocalist without much luck, Edwards was turned on to short-lived NWOBHM supergroup Tytan, fronted by Scottish vocal powerhouse Norman ‘Kal’ Swan. Suitably impressed, Edwards, through Smith’s old Lone Star band mate, John Sloman, who had also migrated to L.A., tracked down Swan in the UK. As it turned out, the singer was more than ready to make a fresh start across the pond seeing that Tytan had split up in the summer of 1983, with an album recorded but stuck in label limbo.

Edwards and Swan had an instant rapport and shared vision of what LION should be and for a brief period Edwards was the lone Yank in an otherwise British five-man unit, with Swan’s former Tytan mates Kevin Riddles and Dave Harrison joining the fold in a two-guitar line-up, and things would remain a revolving door until the arrival of East Coast native, Doug Aldrich, a local guitar hero with a growing reputation.

With the definitive line-up in place, LION were now ready to tackle big things as Edwards and Swan were determined to take their new venture beyond the accomplishments of Steeler and Tytan. The band quickly began to headline around the L.A. area, gigging regularly at The Roxy and the Country Club. LION would also gain the attention of legendary San Francisco impresario, Bill Graham, who felt that the budding foursome had the potential to become a stadium act and briefly took the band on for management, putting them in the studio with guitarist Ronnie Montrose as producer. There were other sessions with Duane Baron and another Tytan connection, Will Reid Dick, which would lead to the release of the Japan-only ‘Power Love’ EP in 1986. A surprise hit, LION were suddenly hot property in the Land of the Rising Sun and a tour was booked, which the band members thought was surreal.

While LION were neck-to-neck with the likes of Bon Jovi enjoying major success in Japan, things were lagging in the U.S., a pair of movie soundtrack contributions aside. With the local major label competition off to the races scoring platinum upon platinum, the feeling in the LION camp was that it was getting pretty late in the game and they needed to get their material out. Eventually, an agreement was struck with CBS distributed Scotti Bros., home to Survivor, a somewhat desperate move Swan in particular was not in favor of and the band would come to regret.

A deal with then red hot producer Tom Werman, coming off platinum success with Mötley Crüe and Twisted Sister, fell through because the numbers couldn’t be worked out and LION found themselves in the basement of the Scotti Bros. offices, known as Santa Monica Sound Recorders, co-producing themselves with the help of engineer Bill Freesh.

Despite all the headaches and hiccups, LION would emerge with a glorious slab of nine muscular, melodic hard rock/metal anthems, released as ‘Dangerous Attraction’ in the summer of 1987. While the album had all the potential in the world to make the band major players and ‘Powerlove’ (featured in the movie ‘The Wraith’ along with ‘Never Surrender’) becoming a Top 20 MTV video, the project remained woefully underpromoted by Scotti Bros. Adding insult to injury, the label decided to pull LION’s tour support just as the quartet was ready to launch a full-scale live assault across North America.

Eventually managing to extract themselves from their record contract with Scotti, LION tried to generate new momentum by forging a label liaison with Grand Slamm Records, re-recording the remaining five songs from their ‘Power Love’ EP, a cover of Slade’s ‘Lock Up Your Daughters’, and four brand new cuts at the legendary, now defunct Sound City studios in Van Nuys, CA. The vigorous ‘Trouble In Angel City’ emerged in the summer of 1989 but the band was stopped dead in their tracks only months later when drummer Mark Edwards sustained massive injuries stemming from a motocross accident that put him in the hospital for months, the initial diagnosis being that he would never walk again, let alone play drums. A benefit show was organized locally, with the late Ronnie James Dio, who had offered Aldrich the coveted guitar spot in his revamped band mere weeks earlier (a future Dio line-up would feature Aldrich alongside yet another Tytan alum, drummer Simon Wright of AC/DC fame, captured on 2002’s ‘Killing the Dragon’ as well as a pair of live DVDs), contributing generously and sending Edwards a personal check to his hospital room.

It was cruel timing, too, as LION were back in the studio putting together new demos for another shot at glory.

Slowly recovering from his close brush with death, Edwards took his final bows as a musician with an emotional Nippon farewell, tagged on the back of the 1990 Hurricane tour of Japan, featuring Doug Aldrich on guitar.

(Read the full story, complete with quotes from Kal Swan and Mark Edwards in the ‘Dangerous Attraction’ booklet)